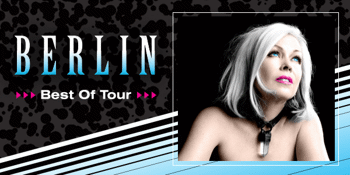 Fusing provocative lyrics with an electronic sound that had as much in common with Donna Summer as it did Kraftwerk, BERLIN created a sound that was both familiar, yet unique. Few bands emerging from the era of BERLIN have achieved as far-reaching and long-lasting an impact and, rarely, such a timeless array of musical grooves. The bands provocative debut single No More Words, Dancing in Berlin and Like Flames were all chart hits in Australia, but it was the unforgettable, intimate, and strikingly beautiful Giorgio Moroder produced love song, Take My Breath Away that took the band to another level. The ballad’s defining role in the Tom Cruise film, Top Gun, helped solidify BERLIN’s everlasting place in American pop-culture. The song was a #1 international hit and received both the Golden Globe and Academy Award for Best Original Song in 1986.

The groundbreaking synth-electro-pop sounds and amazing vocals of Terri Nunn that continue to define BERLIN will be on show on their Best Of Tour featuring all the anthems and classics from their entire career.