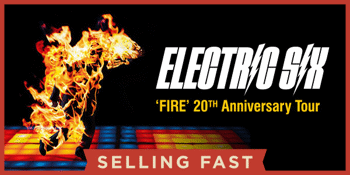 An Electric Six show is a combination of a concert, a theatrical experience, an art exhibit! With such an epic set list includes the classic from ‘Fire’ – Danger! High Voltage, Gay Bar, Dance Commander, Synthesizer + Fan Faves - Down at McDonaldz, Randy’s Hot Tonight, I Buy The Drugs + More

Its been a long wait for Electric Six to return down under. The band were last in Australia and New Zealand in 2005! Electric Six deliver energy and absurdity in equal measure and are “still the best live show around”