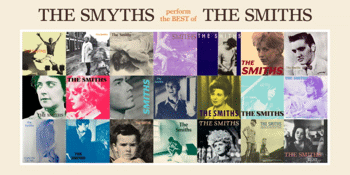 The Smyths (The Smiths Tribute)

“If I had closed my eyes, no-one would have convinced me that it wasn’t Stephen Patrick Morrissey singing onstage.” – Gutter Magazine

Metropolis Touring presents, a touch of Manchester, with the return of the band noted to be almost better than the real thing THE SMYTHS, performing The Best of the Smiths.

Featuring ‘the songs that saved your life’: Bigmouth Strikes Again, This Charming Man, Panic, Ask, How Soon Is Now, Hand in Glove, What Difference Does It Make, There is a Light that Never Goes Out, Girlfriend in a Coma and many more from The Smiths ‘Best Of’ canon.

There’s cover bands, there’s tribute bands, then there’s THE SMYTHS. For more than 11 years and over 500 shows, THE SMYTHS have been retelling classic moments from The Smiths songbook. THE SMYTHS do more than copy and paste; they absorb and omit. Close your eyes, and you won’t know the difference…

THE SMYTHS return to Australia and New Zealand by demand, for a third time having stunned and impressed the most devoted Smiths fans previously.

“The band are respectful in the way they create the sound, clearly loving The Smiths as much as their audience. It never seems forced or contrived, just talented musicians playing to an appreciative audience.”