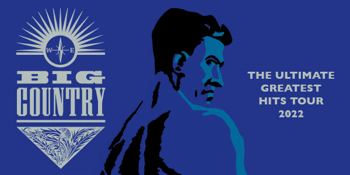 With a career spanning over 40 years and 9 albums – BIG COUNTRY bring their unique Celtic rock and chart hits back down under with classics such as - In A Big Country, Look Away, Fields of Fire, Wonderland and Chance.

BIG COUNTRY formed in Dunfermline, Fife Scotland in 1981 and have retained a cult and loyal following for many decades. The band’s sound incorporates Scottish folk, new wave and alt rock matched to a guitar driven sound, bagpipes, fiddles and other traditional folk instruments.

BIG COUNTRY achieved major international success during the 1980s plus two Grammy nominations and for a time rivaled fellow Celtic big-anthem acts U2 and Simple Minds.  The band successfully toured Australia and New Zealand in 2018 and 2019 and the response for more shows has been overwhelming.

The Ultimate Greatest Hits Tour is a chance to catch BIG COUNTRY through their chart-topping journey through the decades.


All measures are taken to ensure COVID-safe compliance including: